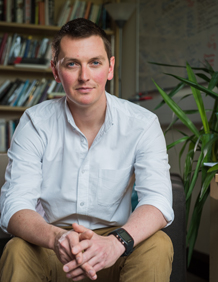 Owen Thomas joined the department in 2014. Prior to this, Owen held an ESRC PhD studentship at the University of Exeter’s Streatham campus and was an ESRC Visiting Research Fellow at the New School for Social Research in New York.

He is a founding member of the Secrecy, Power and Ignorance research Network (secrecyresearch.com @research_spin) and the Network for Critical Engagement with the Defence Academy—both funded by the GW4. Owen sits on the editorial board of the Critical Military Studies journal.

From 2021, he will lead a Leverhulme Research Project on ‘Warnings from the Archive: A Century of British Intervention in the Middle East’. Please visit our project website here: https://warningsfromthearchive.exeter.ac.uk/. This interdisciplinary research project examines two official inquiries, one hundred years apart, into controverisal military interventions in Iraq: the 1917 Mesopotamia Commission and the 2016 Iraq Inquiry. This project deconstruct these inquiries to get beneath official thinking and reveal the contexts, values, cultures and beliefs that have shaped British grand strategy, the lessons learnt and lost from a century of intervention, and the voices heard and unheeded.

His previous research has included extensive work on official inquiries into Britain’s role in the 2003 Iraq War, the relationship between liberal warfare and secrecy, the use of biometric technologies, and research methodology in Security Studies.

Beyond academia, Owen has served as a Magistrate (Justice of the Peace) in the Adult Criminal Court since 2009.

Global politics is rife with crises and scandals: that is, events where something has happened, or is alleged to have happened, that is widely agreed to be wrong. Such scandals often result in lengthy investigations, inquiries, and court cases – promising to establish facts and lessons so that future transgressions can be avoided, demonstrating that the failure has been dealt with or that there has been no failure at all. The Iraq War, the global financial crisis, sexual violence, and the abuse of detainees have all been addressed in this way in recent years. This research examines crises and scandalous events concerning different forms of violence, ask what function crisis and scandal play in politics, and asks how these events are understood retrospectively by society. In other words, how do we understand scandals and crises retrospectively? How does that influence decisions about what is accountable and what lessons should be learnt? What other ways of understanding and learning are possible?

The research shows how the answers to these questions are shaped by methodological, epistemological and ontological assumptions that always already privilege some types of explanation over others, based on assumptions about causation, structure and agency, and responsibility. One such example is the way in which society often seeks to restrict accountability to bad apples – that is, actors who intended to commit (or should have known that their actions would lead to) a transgression of the common good. This excludes the question of the bad barrel – that is, the ways in which actors’ motivations and perceptions of the common good were constituted. For instance, the debate over Britain’s involvement in the Iraq War has often been concerned with questions of malign intent, such as whether the government deceived the public. Such concerns overlook how figures such as Tony Blair to believe, and still believe, that the war was for the common good. Doing so reveals how the preemptive logics behind the war endure today. By ignoring such questions, scandals are excused as ‘blips' and individualising inquiries have the perverse effect of allowing a similar scandal to reoccur.

A brief video that explores some of these ideas through my 2017 article on the Iraq Inquiry can be found below.

Secrecy is about separation: the separation of those who know something from those who don’t know, but suspect that there is something to know. The paradox faced by liberal democracy is that security requires both transparency and secrecy. One promises to govern and secure the uncertainty and insecurity made possible by the other. This research examines questions such as: what is a secret; what role do secrets play in politics; is secrecy always bad for democracy; how do we decide what to reveal and what to keep hidden?

This has two interesting consequences. The first is that while we are used to thinking of transparency being something that is balanced against ‘security’, in global politics demands for transparency can be seen as constitutive of liberal security. The second consequence is that liberal democracies are faced with the difficult question of how to decide what should stay official secret and what should be made public (particularly in times of scandal, see above. This research project examines how this ‘balance’ between revelation and security is managed, and how governments manage to refused to declassify some information for public scrutiny. What is interesting is not that a liberal democratic governments should be capable of maintaining a permanent exception to the duty of disclosure, but that they manage to do so even when under suspicion and through a justification that appears compatible with liberal democratic values. The refusal to disclosed information is justified through a promise to protect liberal concerns of publicity and accountability, without which the security of the liberal-democratic way of life may be placed in jeopardy.

I am also interested in the development of research methods in International Relations and Critical Security Studies. Read more about this research in:

I would be happy to supervise graduate and doctoral research the following areas: