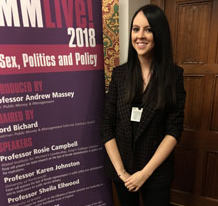 In terms of both research and teaching, my interests lie firmly in the field of public policy and administration, both in domestic UK politics and at a supranational, EU level. More specifically, I explore ideas of new institutionalism and Europeanization, particularly in relation to gender and sexuality, and often within the healthcare domain. To date, this has included the regulation surrounding access to, and delivery of, reproductive technologies such as abortion and IVF, and the management of more criminal matters such as sexual assault. As editor of Public Money and Mangement's 'Equality in an Uncertain Public Sector' (2020) Special Issue my work has extended further to consider the role of public inquiries in learning lessons in these fields.

Between 2016-18, I was convenor of the UK Political Studies Association’s (PSA) Public Policy and Administration Specialist Group and Co-Chair of the Council for European Studies 'Gender and Sexuality Research Network' from 2018-2021. I additionally provided oral evidence for the British-Irish Parliamentary Assembly Report on 'The cross-jurisdictional implications of abortion policy in the BIPA jurisdictions' in 2018.