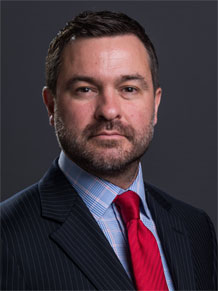 Dr Martin Robson is a Lecturer in Strategic Studies. He specialises in the utility of history for contemporary application. His research focuses on the formulation and implementation of British policy and grand strategy. His historical work encompasses numerous aspects of eighteenth and nineteenth century naval and military history in a global context including aspects of seapower, joint operations and economic warfare. His contemporary work focuses upon UK defence debates with particular reference to the South Atlantic and Latin America. Underpinning all his work is an appreciation of wider themes in strategic studies applied to a maritime context. Further themes include the role of the military (army and navy) in formulating policy and the wider role of militaries in conflict and peace. He is currently researching specific themes around British concepts of jointery, the British Armed forces as learning organisations and the nature of the operational level in maritime conflict.

Dr Robson has over seven years’ experience of civilian and military education at undergraduate and postgraduate levels. Before joining the SSI he was an Associate Lecturer in the History Department at the University of Exeter, prior to that he was at Plymouth University. Between 2008 and 2013 he was a Lecturer in the Defence Studies Department at the Joint Services Command and Staff College, Defence Academy of the United Kingdom. He completed his BA and his PhD in the Department of War Studies at King’s College London before serving as an intern at the Maritime Strategic Studies Institute, Ministry of Defence and was then awarded a National Maritime Museum Caird Senior Research Fellowship. During his career he has worked as an advisor to the Royal Navy’s Maritime Warfare Centre and has also worked with the MOD’s Development, Concepts and Doctrine Centre, The Met Office and The National Archives. In 2015 he was a judging panellist for the Julian Corbett Prize in Modern Naval History. He is a Member of the Corbett Centre for Maritime Policy Studies and in 2009 he founded and acted as Series Editor for the policy focused Corbett Papers.

Dr Robson is the author of numerous books, book chapters and journal articles which reflect his ability to work in both the historical and contemporary strategic fields. His notable historical work includes A History of the Royal Navy: The Napoleonic Wars, (London: I.B.Tauris, 2014); ‘A considerable portion of the defence of the Empire’: Lisbon and victualling the Royal Navy during the French Revolutionary War, 1793-1802’, Historical Research, August 2014, 466-490 and Britain, Portugal and South America in the Napoleonic Wars: Alliances and Diplomacy in Economic Maritime Conflict, (London: I.B. Tauris, 2010). His contemporary publications include ‘UK Air-Sea integration in Libya, 2011: a successful blueprint for the future?’, in Bruns, S., Petretto, K., and Petrovic, D (eds.), Die maritimen Dimensionen von Sicherheit, (Wiesbaden: VS-Verlag, 2013) (with Geoffrey Till) and ‘Segurança Marítima e o Cone Sul’ in Guedes de Oliveira, M., Cultura Estratégica/de Defesa Comparada na America do Sul (UFPE, 2011).

Based on his ability to combine history with contemporary strategic studies Dr Robson will be teaching and supervising across a range of subjects encompassing naval and military history, International Security, Strategic Studies and Politics.