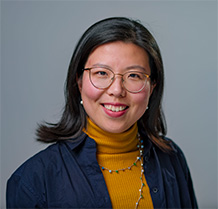 I am Lecturer in Politics at the University of Exeter's Penryn Campus. I joined the department in September 2022 and I currently convene the modules 'Politics of Gender and Sexuality', 'Queer Theory', and 'Politics and Gender in Africa'. Prior to that I was conducting my PhD project, The Political Economy of Women's Political Participation in Rwanda: Gender, Class and Statebuilding, at SOAS, University of London. Please take a look at the 'Research Interests' tab for details on my areas of expertise.

I have studied politics and practised feminism in Beijing, Taipei, Bologna, London and Kigali. I am interested in the representation and resistance of gendered subjects in global politics, and how gendered subjects from rich and poor backgrounds participate in politics differently. For my first book project, I did my fieldwork in Rwanda for a year to investigate women’s engagement with politics after the genocide in 1994. I am also a member of VaChina, a Chinese feminist group in the UK since 2017. Coming from a working-class family background, I am dedicated to the politics of knowledge production and education for the marginalised groups of people.

My research lies in three aspects:

1. The intersection of gender, race, class and everyday politics in post-conflict societies

I am interested in the political economy of contemporary gender legal reforms in post-conflict communities and the continuum of violence manifested in body, social movement, subjectivty, memory, intimacy, ethnicity and race. My doctoral thesis (completed at the Centre for Gender Studies at SOAS, University of London in 2022) examines the material conditions for women to engage with politics in post-genocide Rwanda. With feminist ethnography and African feminism as the methodology, I conducted fieldwork for one year in Rwanda. I argue in the thesis that land dispossesion, market modernisation against informal labour and unvalued reproductive labour prohibited lower-class women in Kigali to participate in political activities on various levels. Thus gender legal reform, including gender quotas for women's political inclusion, is limited to faciliate elite women to join political institutions. The thesis challenges contemporary mainstream liberal feminist conceptualisation of women's empowerment in the aftermath of war, contributes to feminist IR scholarship with innovative ethnography and feminist political economy as the methodology. I am currently transforming this work into a monograph.

From March 2020, I have been coordinating anti-racism grassroots campaigns, especially around Sinophobia and racism against East and Southeast Asians. Such campaigns greatly benefitted from transnational feminist network and activist experiences. Inspired by Patricia Hill Collins' theorisation of 'outsider within', my colleague Leiyun Ni at Warwick and I wrote a paper on our collectve actions against racism and for BLM from a Chinese feminist standpoint during the pandemic. This paper was presented at the Millenium Conference at LSE in October 2020 and published in Made in China Journal in July 2021.

As an educator and teacher, I am interested in critical, intersectional and decolonial pedagogies and the politics of emotions in the classroom.