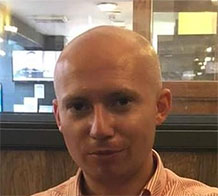 I was appointed Associate Lecturer in Politics (International Relations) in September 2017. During the 2022-23 academic year I am convening POL2121 'Politics and Conflict in Deeply Divided Societies' and teaching on POL2020 'Contemporary Theories of World Politics', POL2076 'Rising Powers' and POL1018 'The Challenges of World Politics in the 21st Century'.

In October 2017 I published my monograph, Peace and Ethnic Identity in Northern Ireland, with Routledge. My research has also been published in several academic journals, including The British Journal of Politics and International Relations, Nationalism and Ethnic Politics, Representation, and Studies in Ethnicity and Nationalism.

I have research interests in conflict management and electoral politics in divided societies, with a particular focus on Northern Ireland.

In addition to teaching and researching politics and international relations, I enjoy visiting cities around the world (my favourite is Tokyo, closely followed by New York and Bangkok) and I am a season ticket holder for Exeter City FC.