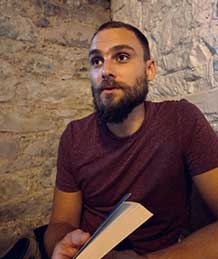 My research interests lie at the intersection of ethics, political thought, and philosophy of nature.

I have have taught across all levels of Undergraduate study and at Masters level, primarily in the areas of political thought and philosophy.

My research lies in the space between ethics, political thought, and philosophy of nature/biology. I am primarily interested in the inter-relations between human understanding of nature, especially the organic world, and thought/action in the socio-political and environmental spheres.

I have published on the political significance of contemporary understanding of evolutionary and developmental biology (2017); the tendency to appeal to 'nature' as a source of moral and political authority (2021a); and the role of the interpretation of organic phenomena in bioethical reasoning (2021b). I have several other publication projects in preparation, including articles on the attitude of wonder in environmental and social relations, the relationship between dehumanization and species essentialism, and Aristotelian concepts of life and flourishing.

Tagney, J. O. (published as Griffiths, J. O.) (2021b) ‘Bioethics, the Ontology of Life, and the Hermeneutics of Biology’, in Ferrarello, Susi (ed.) Phenomenology of Bioethics: Technoethics and Lived-Experience (Springer Nature), pp. 1-21

Tagney, J. O. (published as Griffiths, J. O.) (2013) ‘The Human as a Situated Being: on the Heideggerian Underpinnings of the Extended Mind Hypothesis’. British Journal of Undergraduate Philosophy. Vol. 6 (No. 1), pp. 33–43

Jack Tagney (formerly Griffiths) grew up just outside Penryn in Cornwall. He has a PhD in Political Thought/Philosophy from the University of Exeter (2018), and has been teaching and researching at Exeter in various capacities since 2014.