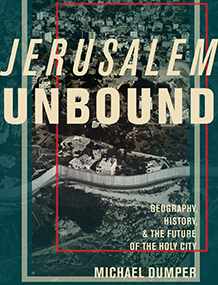 Jerusalem Unbound: a City in Conflict

A new book, Jerusalem Unbound, plots the history and examines the underlying factors that make a peace agreement between Israel and the Palestinians so difficult.

Written by Professor Mick Dumper, a University of Exeter politics expert with over 25 years of experience of Jerusalem, the book explores why religious property in ethnically mixed cities attract conflict and argues that holy sites are particularly difficult in peace negotiations as they cannot be exchanged or traded like other properties. It also compares Jerusalem with other divided cities like Belfast and Beirut and draws out lessons that can be learnt from the way these cities are managed.

According to Professor Dumper Jerusalem is best understood as a “many-bordered city”. His research shows that Jerusalem’s formal political borders are not the full picture. The borders introduced by Israel after it occupied Palestinian East Jerusalem in 1967 do not reflect the many different borders which mark segregated housing, areas of dramatically uneven service provision, types of employment, parallel Israeli and Palestinian national electoral districts or competing Israeli and Palestinian educational authorities. In particular, the city’s large number of holy sites and enclosed religious compounds create enclaves that continually undermine the Israeli state’s authority and control over the city. In this way the lack of congruity between political control and the actual spatial organisation and everyday use of the city by its residents leaves many areas of occupied East Jerusalem in a kind of twilight zone where citizenship, property rights, and Israeli law is ambiguously applied.

The book compares the situation in Jerusalem to Belfast during the height of the ‘troubles’.

The dominance of the Protestant Unionists in the city can be contrasted to the marginalised Catholic communities who were neglected by the UK government and therefore looked for support from outside groups, most notably, the IRA.

Professor Dumper explains that some lessons from other such divided cities can be applied to Jerusalem’s situation. He said: “If one section of a community within a city feels marginalised, they will go elsewhere for support. In the current political and diplomatic vacuum in Jerusalem there is a growing sense amongst Palestinians that acceding to Israeli discriminatory policies in housing, education, employment and mobility in the city leads nowhere. Palestinians have nothing to lose and much more to gain in taking to the streets and reaching out to Arab and Islamic countries for assistance and support, as many Catholics did in Belfast by aligning themselves with a paramilitary organisation.”

The British government realised they could not defeat the IRA militarily, so they sought to bring the Catholic community onside via the Good Friday agreement. It was a way of altering the allocation of power and resources in Northern Ireland and it resulted in improving housing and job prospects for the Catholic community. An essential component in building trust in the Agreement was to reform and increase the number of Catholics in the police service.

Professor Dumper added: “Like other ethnically-based nationalisms, Zionism, which is the dominant political ideology in Israel, promotes the Jewish community over other communities within Jerusalem, who are thus left excluded and marginalised. The two options for the Israeli government are either to expel all Palestinians from Jerusalem, which isn’t feasible, or may cause other major problems, or include them in some way as illustrated in Belfast. Currently neither is happening. The tragedy is that, despite the impasse in the negotiations, political leaders on both sides have actually come a long way in recognising the other side’s claim to Jerusalem and that there are possible models for sharing the governance of the city which have been discussed behind the scenes.”

The book concludes that Jerusalem, as an ethnically mixed city, will not only have to be shared by Israeli and Palestinians, but that the sharing will be based upon its many religious, political, economic, and cultural borders and upon the interplay between history, geography and religion.

Billboard image of Jerusalem from Shutterstock