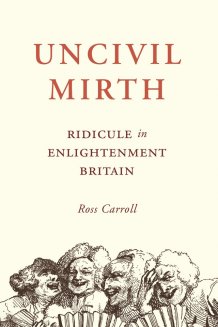 Uncivil Mirth, by Dr Ross Carroll from the University of Exeter, examines how leading thinkers of the period tried to enlist ridicule for causes that served the public good, such as religious toleration and the abolition of the slave trade.

Growth of satire during “age of politeness” saw worries ridicule could lead to abuse, research shows

The explosion of satire in the Georgian period saw philosophers worry mockery could lead to abuse, research shows.

The “age of politeness” was also the age of ridicule, and this led to a “crisis of civility”, according to the new book.

Satire, caricature and comedy thrived in 18th century Britain after censorship was relaxed. This led to moral panic as critics worried it would corrupt public debate. People worried about abuse in a similar way as they do about online rudeness today.

The study shows how philosophers of the time nevertheless defended the use of ridicule to expose arrogance and hypocrisy and hold the powerful to account. Uncivil Mirth, by Dr Ross Carroll from the University of Exeter, examines how leading thinkers of the period tried to enlist ridicule for causes that served the public good, such as religious toleration and the abolition of the slave trade.

Dr Carroll said: “This was not just an era of polite wit. Things were more complicated, and the assumption everyone was civil doesn’t fully capture what happened in public life during the Enlightenment. Ridicule was sometimes used in a radical and aggressive way to tackle major social problems and individuals seen as dangerous.”

“It was thought a blanket ban on rude speech would only benefit the powerful. At the same time there were worries that an increase of ridicule in public speech could lead to citizens gratuitously humiliating each other and wounding those who deserved at least basic respect.”

Dr Carroll examined correspondence between philosophers, their unpublished notebooks and their published texts, including their more satirical works. The aim of the book is to reconstruct the philosophical debate surrounding the uses and limitations of ridicule as an everyday practice of conversation and persuasion, whether in debating clubs, coffee shops, or in interactions between masters and domestic servants.

The debate was begun by Anthony Ashley Cooper, the Third Earl of Shaftesbury. Shaftesbury earned notoriety for maintaining that ridicule could be used anywhere and applied to anything, even to religion. He went so far as to champion it as a better method for disarming fanatics than persecution or legal sanctions. Shaftesbury reckoned that persecution created martrys, while laughing at people showed they posed no threat. In his Characteristics of Men, Manners, Opinions, Times in 1711 Shaftesbury rehabilitated ridicule from the charge of incivility and demonstrated its general usefulness against the bigoted and proud.

Dr Carroll said: “The Enlightenment wasn’t just the era of politeness, but more a period when people repeatedly called for politeness in public debate precisely because it was lacking. Ridicule, on the other hand, was not inherently civil or uncivil, inclusive or exclusionary. There were nuanced differences of style and content.”

Shaftesbury thought the social value of ridicule was so great that preserving its free use in debate was among the most critical tasks that philosophy could perform. A wide range of other philosophers followed his example by writing about the power of ridicule to unsettle prejudice, demarcate the boundaries of sociable behaviour, and attack entrenched systems of thought and power. They ranged from the philosophical sceptic David Hume to his Aberdonian critics Thomas Reid and James Beattie, to enthusiastic defenders of the rights of man such as Mary Wollstonecraft and Alexander Geddes. All engaged in intense handwringing over the damage that even well-intentioned ridicule could cause to civility and social peace.