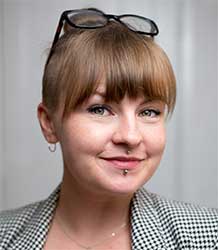 Hannah is an Associate Lecturer in Social Data Analysis and SMART Skills Co-ordinator at the Exeter Q-Step Centre. She recently completed her PhD at Exeter, entitled ‘Electoral Competitiveness and Turnout: How System and Preference Uncertainty Impact the Decision to Vote in Britain’. As a quantitative researcher, her interests include British elections, parties and party systems, gender, political trust, and measurement. Here she tells us about some of the research she has been involved in, as well as about her role at the Q Step centre.

‘My thesis was on British politics and elections. I looked at the competitiveness of British elections from 1964 to 2019, but the latter part focused on the most recent years, so 2014 to 2019. I argue that our current conceptualizations of competitiveness are very much based on two party politics, which is how it used to be, but it's not really like that anymore because of the rise of parties such as SNP, Plaid Cymru, the Greens and UKIP (and their various flavours since and beforehand). I argue we need a new way of measuring competitiveness and then conceptualizing how that impacts turnout, mainly to help people decide how to vote.’

Hannah has also been a Research Fellow on the TrustGov Project: ‘Whilst I was submitting my thesis, I was also doing a postdoc at the University of Southampton on political trust, looking at how trust in the government and in health officials during COVID was important for whether people complied with the rules. I was also Co lead on producing a documentary on the crisis of political trust, called ‘The Trust Crisis’, to reach a non-academic audience. The documentary looks at how people, particularly in western democracies seem to be trusting the government less, the impact that that has, and if there's anything we can do about it. The documentary is being premiered on the 18th Nov at Harbour Lights theatre in Southampton.

Hannah is also working on several other papers, around themes of competitiveness and identity. In addition to research, she also teaches and is the Smart Skills Co-ordinator at the Q Step Centre at the University.

‘Smart Skills is a Devon-wide project that tries to identify skills gaps and then fill them. So there are other sort of facilitators in Devon who are doing for example plumbing courses or whatever. But here at Exeter with the Q Step Centre we do data science. We offer three full courses and then some workshops as well. I teach the basics in Excel and a statistics platform called RStudio. We teach students how to code and introduce them to the role of a data scientist.’