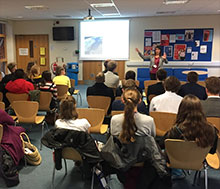 Dr Irene Fernandez-Molina, Lecturer in International Relations at the University of Exeter, spoke to Pupils at the Bishop Wordsworth’s Boys Grammar School and South Wiltshire Girls Grammar School, two state secondary schools in the Salisbury area. The talk was part of the ‘Widening Participation Agenda’ which seeks to increase interest amongst state school pupils in Exeter University. The talk concerned the EU’s relations with the Middle East and North Africa and was very well received by the pupils. One pupil from the Politics Society at South Wiltshire Grammar School remarked:

“Thank you so much for your talk on relations between North Africa and the Middle East and the EU! Many of the students said they really enjoyed it, and felt they had learnt a lot about why the relations have been, and will continue to get trickier (especially as Brexit looms over us). As a Politics Society, we seldom hear from International Relations professors, so your speech provided such a refreshing take on a part of global politics, and global political history, that we don't hear about quite as often as we perhaps should! Thank you again!”

Details of the event were tweeted by the Bishop Wordsworth School’s Politics Society.