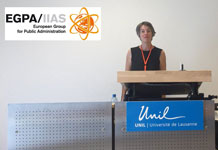 The European Group for Public Administration

Dr Alice Moseley delivered a keynote speech to the Behavioural Public Administration Panel, a standing group of EGPA devoted to the study of the micro-foundations of public administration theory and practice. This year’s theme was nudging and behavioral insight tactics in public administration.  Alice’s keynote, entitled ‘Nudging Bureaucrats: identifying and tackling cognitive bias in bureaucratic decision-making’ outlined a relatively neglected but important area of research concerning the operation and mitigation of cognitive bias in policy decision-makers and street level bureaucrats. Previous work has focused primarily on the operation of bias amongst citizens and elected policy makers, to the neglect of the street level and elite bureaucrats who play a pivotal role in delivering and devising public policy. Her talk highlighted key contributions to this growing subfield and outlined avenues for future research as well as practical ways forward for countering bias and de-biasing the bureaucracy.

Dr Eva Thomann consolidated her activities as a co-chair of PSG XIII on Public Policy, whose workshop topic was “Digitization and Governance”. A joint session was organized together with PSG XXI on Policy Design and Evaluation, which also featured, for the first time, a biennial best paper award sponsored by the JCPA-ICPA Forum in order to celebrate its 20th anniversary. Eva Thomann also participated in the round table about Peter John’s new book “How far to nudge”, where she discussed scope conditions for nudges from the perspective of policy implementation theory.

Professor Oliver James’ co-authored research with Julian Christensen (Aarhus University, Denmark) was presented, in a paper entitled ‘Public Reporting of Multidimensional Performance: Order Effects on Citizens’ Perceptions and Judgment’. The paper reported the results of a randomized survey experiment with over 1300 British citizens which explored the role that the sequential positioning of performance information about schools plays in judgments flowing from citizens’ performance assessment of those schools, including hypothetical willingness to send children to those schools.