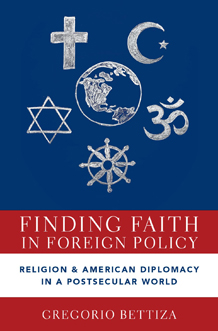 Gregorio Bettiza, Senior Lecturer in International Relations, received an Alberigo Award Special Mention of Excellence for his book "Finding Faith in Foreign Policy: Religion and American Diplomacy in a Postsecular World" (Oxford University Press: 2019) from the European Academy of Religion.

The book explores why, since the end of the Cold War, religion has become an ever more explicit and systematic focus of US foreign policy across multiple domains. It focuses on how US foreign policymakers have been increasingly tasked with monitoring religious freedom and promoting it globally, delivering humanitarian and development aid abroad by drawing on faith-based organizations, fighting global terrorism by seeking to reform Muslim societies and Islamic theologies, and advancing American interests and values more broadly worldwide by engaging with religious actors and dynamics. It finds that religion has become a major subject and object of American foreign policy in ways that were unimaginable just a few decades ago.

Drawing from a rich evidentiary base spanning twenty-five years, Dr. Bettiza's book details how a wave of religious enthusiasm has transformed not just American foreign policy, but the entire international system. A brief presentation of the book's findings is available on the European Academy of Religion's YouTube channel.