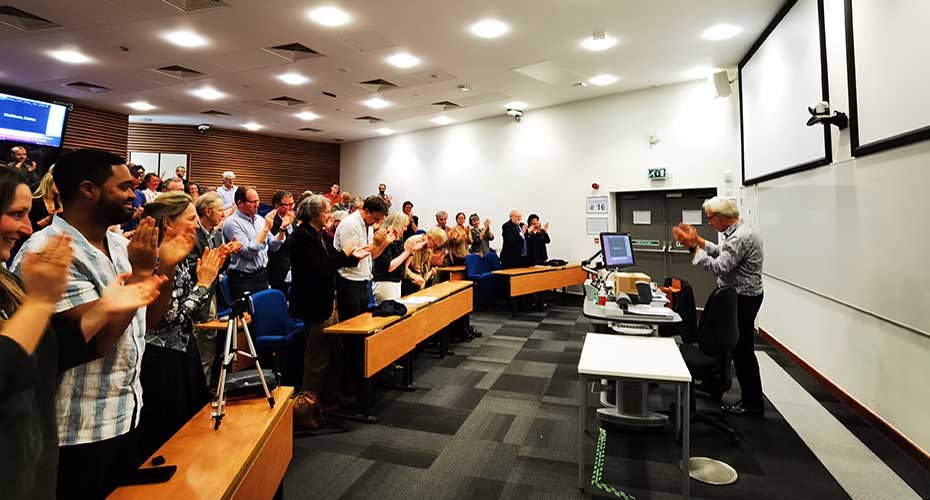 “Dear friends, colleagues and students past and present. After 50 years (with a couple of breaks) at Exeter, I am finally retiring. It has been an extraordinary time in which to teach political theory. During my academic career Political theory has been variously declared: ‘dead’, Marxist, Rawlsian, Neo-liberal, Continental and ‘at an end’. Politics itself has reflected many of these epithets but as I write, and despite certain (over?) confident predictions, neither theory nor history itself show any sign of coming to an end.

Dario has organised a weekend of reflection on ‘The Academic Life’ in May, which will explore, with colleagues, various aspects of it. In a valedictory lecture (‘The Owl’s last hoot’) I’ll reflect on my career, the University and Department, and the business of doing political theory. There will be a series of seminars and round tables on a range of issues to do with ‘The Academic Life’ and ‘political theory’. It will be great to see you there if you can make it, and if not, we hope to make at least some available online. Despite coming off the payroll, I will keep trying to be a political theorist, still edit History of Political Thought, and hope to see many of you and ask awkward questions at seminars and conferences in future.”

After a 50-year distinguished career at Exeter, our friend and colleague, Professor Iain Hampsher-Monk retired last academic year. On the 6th and 7th of May, the Centre for Political Thought organised a two-day event in his honour with the support of the Department of Politics, the SSIS Graduate School and Imprint Academic (the publisher of History of Political Thought, the leading journal in the area co-founded and edited by Iain).

The event gathered leading academics and non-academics with a connection with Iain and Politics at Exeter, including Sir Steve Smith, former VC of the University, and several Exeter alumni: Robert Behrens, Parliamentary Ombudsman; Dominic Byatt, chief Oxford University Press editor for Politics and IR; Dame Suzi Leather, former Chair of the Charity Commission. The event reflected on and celebrates Iain’s contribution to the life of our University both as a scholar of political thought, and as a professional academic. But, more generally, during the various sessions, the participants in the event examined the place of “political thought” amongst the academic disciplines, and during several lively discussions on the Saturday, the many aspects of the life of an academic: as an educator, an active researcher, an academic leader involved in the administration of the University, and as a member of the academic community embedded in the larger society. Iain’s own Retirement Lecture (The Owl’s last Hoot? The University and Political Thought) offered a personal reflection on these very issues. The event provided an opportunity for an older generation of academics to reflect on their experience and on the future of the Universities in dialogue with younger colleagues and research postgraduates.

Gathering together colleagues and friends who, in some cases, had not met for many years, it had an inevitable aspect of nostalgia, but it was also an uplifting and intellectually invigorating event providing an important moment of self-reflection on what we do, and what Universities are for.