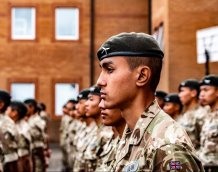 The study stresses that a 'one size fits all' approach is not adequate in the transition process.

Transitioning from the military to civilian life can take a lifetime, new research shows

The process of transitioning from the military to civilian life can take a lifetime and support should be available for decades after people leave the services, a major new study shows.

The emotional labour of transition remains forever, and even veterans with secure housing and employment face significant emotional and mental burdens, according to the research.

Experts have recommended the lifelong support should cover issues such as negotiating identity, managing relationships, and negotiating the cultural differences between military and civilian workplaces.

The Military Afterlives project aimed to understand how British veterans and their families have experienced the transition out of the military and back into civilian life. During 2018 and 2019 researchers interviewed 49 veterans and their family members from across the South West of England about their life stories, including their experiences before they joined the military, whilst they were serving, and after they had left. Participants had different service backgrounds, different ages and genders, and different experiences of civvy street.

The research was funded by postgraduate fellowship grants from Volkswagen Foundation. It is hoped the findings will be used to improve support for veterans of all ages.

Dr Bulmer said: “The complex and unpredictable nature of transition, and life, means we cannot generalise about what a ‘successful’ transition looks like, or how veterans ‘should’ feel about their post-military lives and identities.

“Transition is something veterans do, and they do it in different ways. A ‘one size fits all’ approach to transition support is not adequate. We need to work with veterans to help them realise their own goals, recognising that they have skills and capacities to draw on.”

Many participants described feeling stereotyped when they revealed their military background to civilians. Many participants found civilian workplace culture frustrating and hard to understand. Some were uncomfortable about government initiatives to ‘recognise’ and celebrate veterans.

Dr Micklewright said “Our aim has been to understand transition better so that veterans, their families, friends, and the communities they live in can break down some of these stereotypes. By sharing and listening to the voices of veterans and their families we can shape the narrative positively”

The research found that veterans actively engage in their transition and that it isn’t a linear process of ‘adapting’ to civilian life. Dr Micklewright said that “transitional experiences – moments where veterans have to negotiate the differences between military and civilian cultures - can occur throughout their lives.”

Dr Jackson said: “Increasing understanding of the diversity of veterans’ transitional experiences is a more useful goal than simply increasing ‘recognition’ of veterans by issuing Veterans badges and other schemes.

“The problem with ‘recognition’ is that it can perpetuate stereotypes about military service by telling society what a veteran ‘should be’, further alienating our veterans. What is needed is dialogue to build understanding between military and civilian communities.”

Some veterans described themselves as leaning into the stereotypes held about them by the public, taking them on as part of their identity. Brian, now a primary school teacher, said: “I think I play up to the stereotype a little bit as well, but the children respond to it, as in my teaching style, because when I do PE, I do it in a very tongue in cheek military manner. The children really respond to it.”

Other veterans had a negative experience because of stereotyping, with people making assumptions about their political views. Some minimized their military experience on their CV, and others removed it completely.

The research found that many veterans reconnected with the services after decades of no contact. Ray was involved in a wide range of activities with the Royal Marines, and had acted as a mentor to Royal Marine recruits. He said: “You don’t have to hide anything from anybody, you don’t have to put on a different persona for anyone, they take you for who you are, end of story, and it’s that sort of friendship you won’t find anywhere in civvy street.”

Another veteran, Eddie, said reconnecting had helped him tackle PTSD and feelings of loneliness and isolation because he could talk with people who have gone through similar experiences. Many veterans described their former military colleagues as a significant source of support throughout their lives.