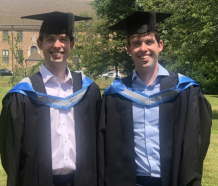 Talented twins whose music is championed by Coldplay have graduated from the same course, at the same university, on the same day.

Theo and Bertie Pedrick decided to study together at the University of Exeter so they could pursue their music career.

Coldplay drummer Will Champion has acted as mentor for Bertie, the guitarist and singer, and Theo, the lead singer in their band PEDRICK. Mr Champion met with them after hearing their music, has kept in touch and even let Theo and Bertie record in Coldplay’s studio.

While both studying history and international relations, Theo and Bertie, who hope to make a living from their passion, honed their performance skills in Exeter, playing with two friends who played drums and bass in local venues including the Exeter Phoenix and the Old Firehouse.

Bertie said: “With perseverance and passion hopefully one day we will achieve our dreams. We are rehearsing to get back on the stage as the covid pandemic was a huge blow to our aspirations. Coldplay are lovely guys and have been so good to us – giving feedback on songs, introducing us to small record labels and giving technical advice about recording.”

Theo and Bertie’s mum Katie used to be a dancer in the Sadler’s Wells Royal Ballet and they grew up listening to music around the house. They were classically trained on the cello (Bertie) and trombone (Theo) and won music scholarships to the Kings Canterbury School in Kent. They have been writing their own songs and performing their “rockier side of pop” songs since they were teenagers.

Bertie said: “People told us we wouldn’t get the same A-level results – and in the end our grades were exactly the same. They all told us there was no way we would be able to go to the same university, but we did. We did our own thing, lived in different places and had different friends, and would come together for music. Being in the same place was crucial at the time, allowing us to rehearse and develop.

“The bond twins have can be hard for others to understand. Our friends would say we have very different personalities – my brother is more laid back and I’m more of a worrier. I’m a minute older, a little bit taller, but we do look very similar!”

Theo and Bertie, who grew up in South London, were the first in their family to go to university and their younger brother Algy is due to start a degree in business studies at the University of Exeter this September. They graduated last month.

Bertie said: “The ceremony was a great day for us and our family. I’m not sure if the Chancellor noticed we were twins as we went up to collect our degrees after each other. It was quite a long ceremony – so perhaps he thought he was hallucinating! We’ve got such happy memories of our student days and the amazing time we had.

“We didn’t discuss the modules we picked for our course but every time we seemed to do the same thing and were in the same seminars. We used to have fun confusing people by swapping clothes when we were younger, but we don’t look as identical as we used to so nobody really noticed or cared about the fact we were twins at Exeter. It did used to be funny bumping into each other when we were out though.”