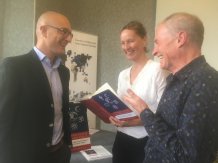 Dr Bettiza at the launch of his book with academics Anne Jenichen and Jeffrey Haynes, who took part in a discussion with him at the event

Faith is increasingly used to advance the interests and values of the United States around the world, according to a new book by Dr Gregorio Bettiza from the University of Exeter.

In Finding Faith in Foreign Policy: Religion and American Diplomacy in a Postsecular World, Dr Bettiza shows how policies have been put in place to monitor religious freedom and promote it globally, draw on faith-based organisations to deliver humanitarian and development aid abroad, fight global terrorism by seeking to reform Muslim societies and Islamic theologies, and engage with religious actors to solve conflicts and crises around the world.

This trend was highlighted recently by President Trump’s decision to attend an international religious freedom event instead of taking part in the high-level discussions on climate change being held during the UN General Assembly meetings in September. Donald Trump’s first trip abroad as President was rich in religious symbolism as he visited Saudi Arabia, Israel and Rome, the centers of the world’s three main monotheistic faiths.

Dr Bettiza said: “In recent decades religion has become an important subject and object of US foreign policy. During the Clinton years, the promotion of international religious freedom was first institutionalized, with the Bush administration the faith-based initiatives were launched and Islam and Muslims became a target of counter-terrorism policies. With Obama, the office of Religion and Global Affairs was created in the State Department.”

These changes signify a weakening of secular arrangements and a growing entanglement between American foreign policy-making and religious individuals and organisations. This means religion has increasing relevance in world politics.

“The purpose of these policies is to advance the United States’ interests and values globally by managing and marshalling the power of faith. Of course, this is due to events such as 9/11, but there has also been a wider resurgence of religion around the globe. As a result, many have come forward arguing that US foreign policy remained problematically secular in a world exhibiting instead growing religious vitality”.

“Pushing for these changes in foreign policy have also been a rising tide of religious lobbying and advocacy in America, especially among Protestant Evangelicals and the Christian Right, as well as a burgeoning range of initiatives and institutions across universities and think-tanks producing policy-relevant knowledge about religion in world affairs.”

The book also charts the important influence of individuals such as Presidents, members of Congress, and Secretaries of State on this change to foreign policy-making.

Dr Bettiza said: “Foreign policymakers no longer believe religion is a negative and problematic force that needs to be kept out of world politics. Instead, some have come to see religion as ambivalent, or as a force for good in the world which should be drawn upon to solve a wide range of international issues.”

“The result is often some kind of state support of certain religions and religiosities or, in some rare cases, even of religion over non-religion. Religious traditions and landscapes are potentially being reshaped around the world according to US priorities and understandings of faith.”

The book, published by Oxford University Press, was launched at an event at the University of Exeter marking the start of the 2019/20 academic year