Dr Lamprini Rori co-organised a two-panel conference on the political participation of the Greek diaspora in national political affairs, which took place at the Onassis Cultural Centre in Athens, Greece on Monday 29 October 2018.

The economic crisis that Greece is faced with since 2010 together with its multifaceted economic, social and political ramifications has amplified the significance and volume of the Greek diasporic communities. The new emigration wave primarily concerns younger and educated Greeks thus draining Greece of one of its most productive population segments. Despite the significance of this phenomenon however, the political discourse in Greece has not paid sufficient attention to the Diaspora issue, its rights and capabilities for political participation.

The political participation of diasporic communities could play a significant role in several dimensions of public life, notably foreign policy, and contribute to the economic development of Greece through knowledge transfers as well as the social capital of Greek intellectuals abroad. Bringing together academics, politicians and technocrats this event shed light to different aspects of the issue of diasporic political participation and brought to the fore the discussion about the right of Greeks abroad to vote and its potential consequences. The first panel, comprising academics, focused on aspects of diasporic political participation, identifying fields, actors as well as the means through which it can materialise. The second panel involved politicians who addressed the potentials, complications and limits in the right of vote among the Greeks abroad.

The event was co-organised by the Greek Politics Specialist Group - Political Studies Association, the Greek Diaspora Project of the University of Oxford and the research and policy institute diaNEOsis and was hosted by the Onassis Foundation.

Program and speakers of the conference 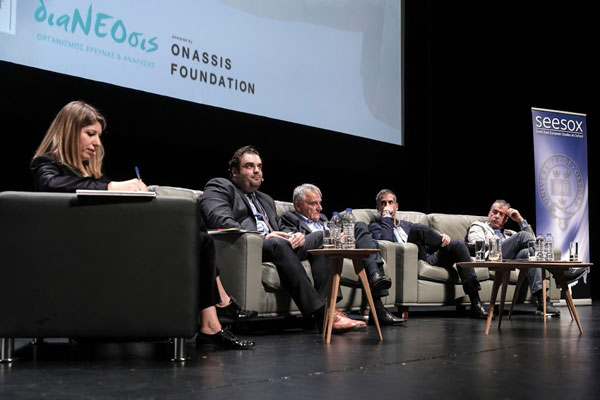