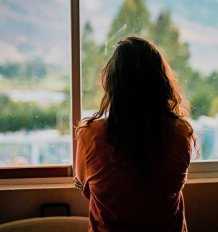 A total of 25 per cent of women who took part in the research reported mental health issues compared to 15 per cent of men.

A fifth of people have reported experiencing mental health issues and a third of people are feeling isolated because of the coronavirus pandemic, a major new survey shows.

A total of 25 per cent of women who took part in the research reported mental health issues compared to 15 per cent of men.

The survey, run by the University of Exeter and ORB International among 5,000 people living in England, also shows coronavirus may be deepening some social inequalities.

A total of 8 per cent of those involved in the research said they were finding it more difficult to pay their mortgage or rent, and 13 per cent were now experiencing problems in balancing their weekly budget. Ten per cent had lost their job or job security, and 9 per cent said their business or workplace had failed or was struggling.

People who voted Remain in the EU referendum who took part in the survey more likely to report experiencing mental health issues due to coronavirus. Those who had voted Leave, or Conservative in the General Election, were less likely than those who backed staying in the European Union, or had voted for other parties, to say they were experiencing mental health issues.

The UKRI covid-19 rapid response ESRC-funded research also asked people how their expectations one year from now five years from now compared to before the virus struck.

Respondents were asked to rate issues on a scale from ‘much worse’ (-2) to ‘much better’ (+2), or “no change”. Most people thought the economy, schools, Britain’s place in the world, local services and inequality would be worse in one year. Expectations about the economy were the lowest at a mean of -0.90, followed by Britain’s status in the world -0.45, local services -0.42, inequality -0.31, and schools -0.24. At the same time respondents thought the NHS would be in a somewhat better position (0.32), along with the environment +0.27. There was general optimism in five years the economy will have bounced back (+0.15), and that NHS improvement will be sustained (+.42), but also that the environment will have gone slightly backwards from one year after the virus (+.10), and that inequality will be about where it was before the virus (-.03).

Half of people who took part in the survey, conducted in late July, said coronavirus had had a more negative impact on cities than others areas of the country.

Professor Dan Stevens, who led the survey, said: “The research is further evidence Covid-19 is a virus which does discriminate. The impact of the pandemic is not equal and the virus may be exacerbating some of the existing divisions that were a legacy of Brexit while opening up other new ones. While the differences in experiences with mental health may reflect factors beyond diagnosis, such as demographics and willingness to report, it is there in the data even when we account for factors such as sex and age.

“Peoples’ expectations for the country in five years also appear to be quite tempered. They think the economy will recover but are less optimistic about other issues such as inequality and the environment, although these expectations too vary by whether or not they voted Leave or Remain among other factors. We are tracing these views, along with experiences in the context of Covid-19 such as mental health issues, over the next few months, to see how and whether they evolve further.”

The project’s principal Investigator, Katharine Tyler, said: ‘This research aims to explore the effects that the extraordinary and intertwined events of Brexit and COVID-19 are having on people’s everyday lives across geographical locations, racial, ethnic, class, national, migrant and generational identities. One aim of our research is to generate new integrated survey, media and ethnographic data to better understand how the COVID-19 crisis has deepened the inequalities across identities exposed in Brexit Britain and whether new inequalities are emerging. These early survey findings represent the start of this process.”